The U.S. Department of Transportation guidelines do not require that a synthetic drug called "K2" or Spice--and its symptoms of use or effects of use--be part of the DOT reasonable

suspicion training course that you might offer. And it won't be screened in a urine test.

But I recommend supervisors give it few slide frames of education because this stuff does affect the workplace, in fact, the U.S. Army is swimming in Spice/K2 problems, at least on some installations.

A recent story in a local newspaper in the town of Sioux Falls, ND discussed how a baby sitter left a 8 week old baby outside accidentally for 18 hours while high on K2--in the rain! She survived. But if you want unpredictable behavior, insanity, and at-risk employee in your workplace, this is the drug that delivers.

K2 is often called synthetic pot or marijuana. Who knows why the call it that. A look at the literature does not see much. It appears that the substance, rolled in cigarette paper or smoked in a pipe resemble the look and feel of marijuana, but smoking it is another experience entirely. K2 or Spice has nothing to with THC -- the active ingredient in POT. K2 is actually made from a bunch of crazy-ass chemicals that are sprayed on smoke-able material.

K2 is another name for synthetic marijuana. It's made from a variety of man-made chemicals and can be sprayed onto dried plant material to be smoked or it can be sold as liquids to be vaporized and inhaled. The important message is that the user is not going to have the same experience as smoking pot. The reason is obvious.  K2 Spice or synthetic marijuana is not pot. It junk of the worst order.

The agitation after smoking Spice can be enormous. The first symptoms are elevated mood, feeling relaxed, can finally alternate reality that will freak you out. Your heart might feeling like it beating itself to death, you may vomit. You may have a relaxed feeling, but one trip to YouTube to see people using Spice/K2, and you will be convinced otherwise that this drug is bad news. Paranoia, hallucinations, yep, everything comes with this smoke-able trash.

The chemicals that make up Spice/K2 don't even have names--just their chemical codes. Spice/K2 was legal at one point in time nationwide, now most are attempting to outlaw it.

Posted by Employee Newsletter Lessons: #1 Warning How to Create a Newsletter Painlessly at 3:41 PM No comments:

​Alcohol Awareness Training to Meet DOT: Don't Make It All about Signs and Symptoms

​Alcohol Awareness Training to Meet DOT: Don't Make It All about Signs and Symptoms: Alcohol Training for DOT Supervisor Training, What to Include.

This blog post is about Alcohol Awareness Training for DOT Supervisors and going a bit further in explain the illness and treatment to inspire motivation and reduce enabling. We have discover over the years that more education about the disease actually does more to inspire supervisors to act rather than continue to cover up.

Posted by Employee Newsletter Lessons: #1 Warning How to Create a Newsletter Painlessly at 5:16 AM No comments:

What Reasonable Suspicion Training Online Should Include So Supervisors Don't Snooze.......ZZZ

If DOT supervisor training for reasonable suspicion of drug and alcohol abuse is going to be effective, then one thing's for sure: 1) Supervisors must watch the program and 2) Supervisor must remember what they saw.

Oh, sure - you can get supervisors trained pretty easily, but will they act on what they were supposed to learn, when necessary, to intervene and refer a drug user or drunk employee to testing? That, indeed, is the question.

With these issues in mind, let's discuss several key ingredients of effective supervisor training that together will give you the best shot of keeping someone from getting killed in or outside of your organization as a result of alcohol misuse and drug abuse by a worker. 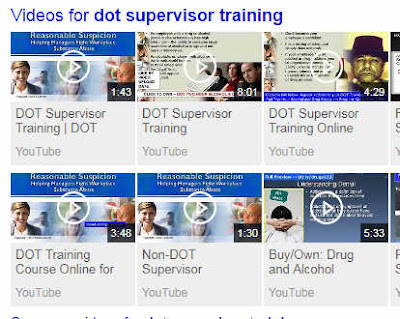 Restricted Training Program
Regarding online reasonable suspicion training, a restricted training program is a must. It is designed to maximize engagement to supervisors don't fall asleep

It must also be manual. No auto-playing like a movie.  It must be engaging, and frames must be clicked manually to advance the course. This forgoes sleeping. It does not run like a movie so the learner can snooze until the end. No way. Many DOT supervisor training programs for drug and alcohol course completion do, so guard against purchasing a program that allows nap time. (I know, I bet I am the only one talking about this. Guess why. I have been training and creating DOT courses for 20 years. I have seen it all.)

The web course should force the learner to click each frame, and the course must have two hours of content -- no not necessarily all of it audio-visual--in fact, definitely not. I will discuss this below.

Many DOT reasonable suspicion training courses have two hours of audio-visual content running as shown above in a video presentation. I have discussed the downside of this type of course, but let's be honest, employees will doze in front of such training. The motto: "Wake me up when it is over."

To prevent this, as stated, you must force engagement. But another part of this is multi-educational elements that go a step further to reduce risk in your organization.

You training become "sticky" when you have numerous ways to absorb the information: audio, visual, manual engagement, educational test questions, and printable, take-away handouts that supervisors keep, use later, refer to, and refresh their memories with months and years after training.

Since supervisor training for DOT supervisors is not required but ONE TIME -- they must walk away with resources that will help them act when necessary.

Alcoholism Education--Make It Intensive, and Scientifically Based

Alcohol abuse, alcoholism, addiction, and addictive disease (ditto drug abuse) are confusing terms, completely embedded in mythology, centuries of arguments, family history, and more. It's a real mess. Everyone you know including your mother can tell you what any of them means. But most are wrong.

These terms in one form or another have been around 7,000-8,000 years since beverage alcohol was discovered in the form of wine by the Chinese. Luckily there has been enormous research on genetics to explain alcoholism, its cause, who is at risk, and why the disease is acquired.

If you do not punch hard at these issues, you will have supervisors walking way from the course completely unmoved in their fast held beliefs, which are usually completely wrong.

These beliefs, most of which are rooted in morality, will power, too much alcohol abuse, character, religious issues, and personality disorder-related myths and false models of causation, interfere with behaviors of a supervisor. As I author this post, a new study related to genetics that predicts alcoholism has just been released. You can see it here. Alcoholism is not an equal opportunity illness. It sounds clever, but the truth is some people will never become alcoholic no matter how much that attempt to drink. They will get sick, throw up, become adverse to drinking. They just don't the the genetic constitution to become addicted. Others will become alcoholic beginning with their first drink.

There are other elements to help make training more effective. But the most important common denominator of the above issues is that none of them are required by the U.S. Department of Transportation regulations governing training of alcohol and drug abuse of DOT Supervisors.

I will continue with these other issues in an additional post soon. 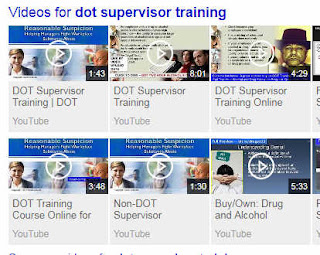 to prevent the supervisor-participant from skipping frames of the course, jumping to the test, completing it, and walking away without learning a thing.

Get reasonable suspicion training now or see the full course for free..
Posted by Employee Newsletter Lessons: #1 Warning How to Create a Newsletter Painlessly at 9:38 AM No comments:

Many of you are asking about the DOT Supervisor Training Requirements and the need for a DOT Supervisor Training Certificate. I have faster way of explaining this with the graphic shown below. Feel free go ahead see the full DOT Drug and Alcohol Program without cost or obligation at WorkExcel.com in case you are looking for such training. You can get training for ONE SUPERVISOR or own the program in any format like PowerPoint, DVD, Web Course, or Video. 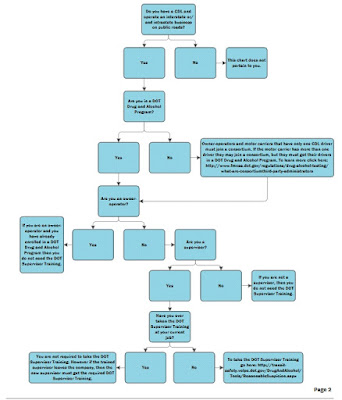 Click here to see the full document of this flow chart above.
Posted by Employee Newsletter Lessons: #1 Warning How to Create a Newsletter Painlessly at 7:25 AM No comments:

We know that the U.S. Department of Transportation does not require that mandatory alcohol and drug education 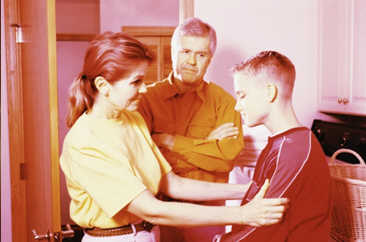 training
for DOT supervisors include information like teen drug abuse, enabling,
or even job performance related information associated with employee
substance abuse -- except of course, how these might affect psycho-motor
skills. In other words, discussing absenteeism is not even relevant if
you read the regulations.

Obviously, your training needs more
than what the DOT recommends. If not, you're going to fall short of
motivating DOT supervisors to act on the drug-free workplace policy if
they stay awake, that is. And, this is the goal, correct--acting to
refer to testing if signs and symptoms of substance abuse are demonstrated by reasonable suspicion?

Reasonable Suspicion Training Topic: Throw in Some News and Information on Teen Substance Abuse
Posted by Employee Newsletter Lessons: #1 Warning How to Create a Newsletter Painlessly at 10:08 AM 1 comment: